The Music of catherine Ellis

…He knows when the sun will rise again each morning
He knows all his neighbors for fifteen miles around
His bones all know the feel from sixty years of working
His fields all know his touch, though he’s a stranger in town.
~ “Lyle’s song”

And so I walk these floors at night, crying
It’s over way too soon
And it’s then that I find Venus
And she’s holding up the moon
~”The Watchman” 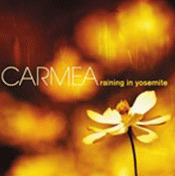 1. Circle of Love (Catherine Ellis © 2008)  This song was born through the nurturing guidance of Pat Humphries and Sandy O of emma’s revolution, under a shade tree in the warmth of an August sun.

4. Raining in Yosemite (Alma Muxlow © 2009)  Lady Justice, depicted as a blindfolded woman holding measuring scales, came alive for me as I wrote this song. It was a response to the passage of Proposition 8 in California and Kalamazoo’s struggle to add sexual orientation and gender identity to the city’s non-discrimination ordinance. (Thanks to Rachel and Jane for the first two lines.)

5. On the River (Catherine Ellis © 2008)  With love to my sister and brother-in-law in celebration of their 40th wedding anniversary on the St. Joseph River.

8. The Red Motorcycle (Catherine Ellis © 2009)  This is my favorite story from Alma’s childhood. At three, with a lone penny in her pocket, she decided to walk five miles into town to buy a real motorcycle. Her mother saw her head bobbing above the July corn just in time to intervene.

9. Dance (Rachel Alexander © 2004, 2008)  In 2004 Michigan voters passed a constitutional amendment defining marriage as being between one man and one woman. Outraged and deeply saddened, I wrote this song. Jane and I were married in California in October of 2008, shortly before the passage of that state’s Proposition 8 made same-sex marriages once again illegal in California.

10. Angels Surrounding You (Catherine Ellis © 2009)  Often we are unaware of the blessings that await to carry us through adversity. This song is an expression of gratitude to all who delivered meals to our door and listened deeply to my experience during my recovery from cancer in 2005. (Happy Birthday, Karen HG.) 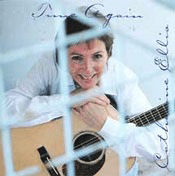 6: Love Is No Currency

15: Walk With Your Heart 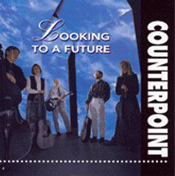 Looking to a Future with Counterpoint

(I’ve Been) Looking to a Future Catherine Ellis/Robert McCloy

I Will John Lennon/Paul McCartney

Re: Looking to a Future, Counterpoint CD: "LOOKING TO A FUTURE provides a wonderful example of good music. The main focus of LOOKING TO A FUTURE is on well arranged vocals in lush acoustic mode. As a special treat, included are two poignant originals from Catherine Ellis, a writer of true substance."
--Jerry Douglas, Nashville, Tennessee